How long does pregnancy in dogs last?

Pregnancy in dogs, also called the gestation period, normally ranges from 57-65 days, with an average of 63 days. With a planned breeding, you should record the exact date of mating. If there are two matings, note the dates and expect birth to occur between 63 and 65 days later.

What should I do immediately after my female dog has been mated?

Make sure she does not have the opportunity to mate with other dogs. Remember that estrus or 'heat' will continue for several more days, and she could theoretically become pregnant from another dog during this period. After a planned mating, allow her to rest quietly for a few hours. 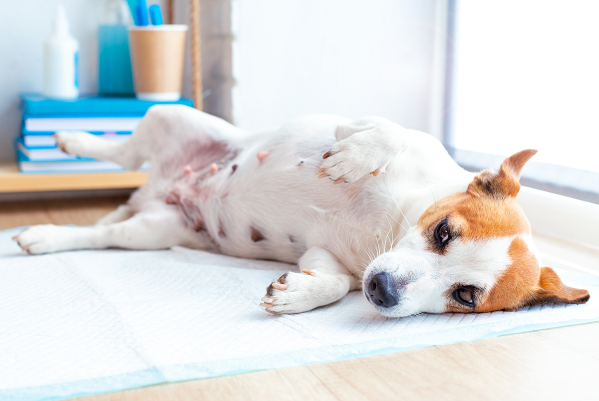 Should I change her diet?

After mating, food intake should remain the same during the first two-thirds of pregnancy (approximately six weeks after mating). Ensure you feed your dog a premium, high-quality diet approved by your veterinarian during pregnancy. It should bear an AAFCO label stating that it is appropriate for “gestation and lactation” or “all life stages.” Discuss nutritional supplements and vitamins with your veterinarian before giving them to your dog. It is recommended that your dog be fed a diet rich in omega-3 fatty acids (DHA) while pregnant to help puppy development in utero and during milk production.

"Ensure you feed your dog a premium, high-quality diet approved by your veterinarian during pregnancy."

What do I do after the sixth week?

After the sixth week of pregnancy, your dog’s food intake should gradually increase. As the fetuses grow, abdominal pressure increases and frequent small meals are advised. Diets containing high levels of omega-3 docosahexaenoic acid (DHA) have been shown to improve the health and development of puppies and should be considered. Discuss DHA-supplemented diets for your pregnant dog with your veterinarian.

During the last three weeks of pregnancy, your dog's food intake should increase by up to one and a half times the normal level by feeding smaller meals more frequently. This will help support your dog’s health and body condition while she is in the final stages of pregnancy and producing milk after whelping.

What about medications that my dog takes?

Some commonly used medications should be avoided while your dog is pregnant. Contact your veterinarian to discuss the use of any supplements and medications.

How can I be sure my dog is pregnant?

Early pregnancy detection in dogs can be challenging. A blood test can detect pregnancy in dogs by measuring the hormone relaxin; however, false negatives can occur if the test is performed too early or if the dog is carrying only one or two puppies (see the handout "Pregnancy Testing in the Dog"). A positive test indicates that the dog is pregnant at the time of the test but does not mean that the pregnancy will be successful. A veterinarian can perform trans-abdominal palpation (feeling the abdomen for an enlarged uterus or individual fetal swellings) about three to four weeks after mating, but the results are variable. In some cases, results depend more upon the female dog’s relaxation than the veterinarian’s experience.

"Abdominal ultrasound is currently the method of choice for pregnancy diagnosis."

Abdominal ultrasound is currently the method of choice for pregnancy diagnosis. Depending on the equipment and patient, a positive diagnosis can be made as early as three weeks. Most scans performed after day 28 of the pregnancy are reliable. Due to positioning within the abdomen, it can be difficult to count the number of fetuses on ultrasound accurately. An abdominal radiograph (X-ray) during the last two weeks of pregnancy, generally around week seven, is the most accurate method for determining litter size and should be performed on all pregnant dogs so that you will know when your female is finished having puppies.

Should I change her routine as pregnancy advances?

As pregnancy progresses, intra-abdominal pressure increases, and so do the mother's food requirements. The dog usually needs to have an increased number of smaller meals rather than an increased quantity per meal. Let your pet decide how much physical activity she needs. This depends on the number of puppies and the intra-abdominal pressure she is experiencing. Do not over-exercise a pregnant female. Check for vaginal discharges and contact your veterinarian if you have any concerns.

© Copyright 2022 LifeLearn Inc. Used and/or modified with permission under license.